Interview with Paul Koenraad, Dean of the TU/e Graduate School

The EuroTeQ cooperative alliance, in which the European Union will be investing seven million euros over the next three years, brings together six European universities, among them TU/e, intent on giving their educational offering a more innovative design. Increasing the proportion of TU/e students choosing to study outside the Netherlands is a hoped-for secondary effect. At present, sixty percent gains international experience before graduating.

This article was published by the TU/e Cursor on 8. June 2021 by Han Konings. 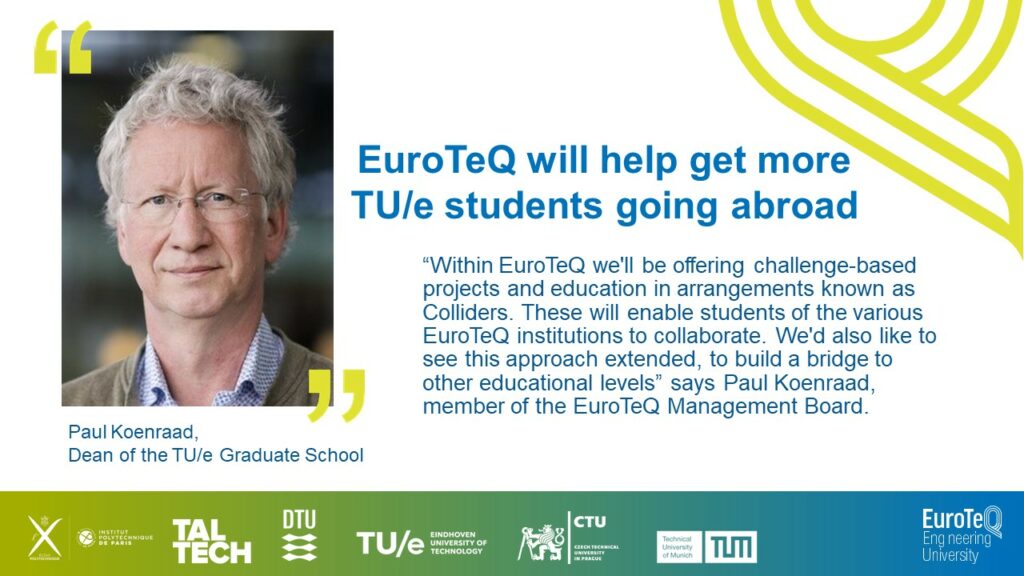 Paul Koenraad, Dean of the Graduate School, hopes to further boost this figure of sixty percent in the coming years. EuroTeQ, an initiative stemming from the cooperative alliance EuroTech, itself now ten years old and of which TU/e is an original member, can help him achieve this aim, so he believes.

“For years now our university has worked hard to offer its students a foreign educational experience,” says Koenraad, “but raising our current level is proving a challenge.” At present one in two of the university’s graduates has been abroad for study or research at some point during their program. For Koenraad, the scope for growth goes without saying. And in this, EuroTeQ, launched officially in November 2020 for a three-year period, has an important role to play.

The group of EuroTeQ partners shows some overlap with those involved in EuroTech. But since the European Union does not fund educational projects involving institutions from outside Europe or from Switzerland, Lausanne’s EPFL and Haifa-based Technion are not full partners in the newer alliance. In their place have come Tallinn University of Technology in Estonia and the Czech University in Prague. In fact, according to Koenraad, looking more to the east when seeking European partner institutions is something the EU favors.

The six EuroTeQ partners have a total of 115,000 students under their care. The focus for the next three years will be primarily on developing a new approach to educating engineers and the question of how this can best be supported by the institutions, with their campuses and facilities. An important factor will be the new form of education with which TU/e has already made plenty of headway: challenge-based learning (CBL).

According to Koenraad, this form of education is already in evidence at multiple institutions, though it sometimes goes by a different name, “but I would venture to say that we are one of the frontrunners in CBL. Within EuroTeQ we’ll be offering challenge-based projects and education in arrangements known as ‘Colliders’; these will enable students of the various EuroTeQ institutions to collaborate. We’d also like to see this approach extended, to build a bridge to other educational levels.”

Koenraad says that it would be a good thing if the Dutch government were to recognize the necessity of wider European cooperation in education and invest in it. “The co-funding of this kind of European educational project is happening in both Germany and France. There, money is being pumped into them. We hope that when we have a new cabinet, they take a similar view.”

Other important aspects of TU/e’s Educational Vision 2030 that Koenraad is keen to see integrated within EuroTeQ are the pursuit of the international classroom, in which thirty percent of the student population is international; the BOOST project, which involves developing innovative ICT tools for education; cooperation with trade and industry, which is well-established at TU/e; and life-long learning. “And don’t forget our innovationSpace,” says Koenraad. “The other universities also have these kinds of initiative. So we can learn from each other.”

That EuroTeQ will lead to more TU/e students wishing to spend some months studying at one of the EuroTeQ or EuroTech institutions is something Koenraad very much hopes to see happen. “We have sixty percent of our students already spending time abroad; we need to boost this figure.”

It is EuroTech’s aim to see fifty percent of its students gain foreign experience at one of its partner institutions as early as 2030, but given the current percentage of EuroTech exchanges, Koenraad feels this is overly ambitious. “If we are at twenty-five percent by 2025, I’ll be more than happy. I’m taking this figure to include students who take a foreign program of study while based in the Netherlands. After all, we’ve lately seen the quality of online education come on in leaps and bounds.”

EuroTeQ – a prestige project of the European Commission

The European Universities Initiative is one of the European Commission’s most prestigious funding schemes. The objective of this instrument is to establish ambitious European university alliances over the next few years that will make the European university landscape even stronger. The EU is funding EuroTeQ as part of its European Universities programme over three years with around five million euros through Erasmus+ and two million euros from Horizon 2020.

Co-funded by the Erasmus+ Programme of the European Union

Co-funded by the Horizon 2020 Programme of the European Union

This website uses cookies to improve your experience while you navigate through the website. Out of these, the cookies that are categorized as necessary are stored on your browser as they are essential for the working of basic functionalities of the website. We also use third-party cookies that help us analyze and understand how you use this website. These cookies will be stored in your browser only with your consent. You also have the option to opt-out of these cookies. But opting out of some of these cookies may affect your browsing experience.
Necessary Always Enabled
Necessary cookies are absolutely essential for the website to function properly. These cookies ensure basic functionalities and security features of the website, anonymously.
SAVE & ACCEPT